A while ago I saw the opportunity to be involved with a fabulous new book being put together by Charlie Plunkett.  Already a successful author having published 3 books, Charlie was looking for parents and grandparents to write 100 words on various aspects of parenthood.  I thought it looked like a fantastic thing to be involved in and submitted my 100 word birth story.  I was delighted when Charlie said she would include me in her new book.

Before Christmas the book was released as an e-book and I downloaded my copy.  I really enjoyed reading everyone’s 100 words, it amazed me what people could write in so few words!  Some made me laugh, others cry, but all were well thought out and a great read.  It was really lovely to see my name in there amongst all those other fabulous people!

The book has now been released in paperback and I was thrilled to receive my signed copy from Charlie and to see my name in print!  Charlie was kind enough to send to me a 2nd signed copy and I have decided to give this away to one of you lucky readers.  All you have to do is complete the Rafflecopter form.

100 Little Words on Parenting really is a great read and I would highly recommend it to anyone parent or not!

Charlie will shortly be visiting my blog as part of her tour round all her contributors so look out for that soon!

When I saw the opportunity to review The Mummyfesto by Linda Green I jumped at the chance.  I love ‘chick lit’, give me anything by Marian Keyes, Jill Mansell, Louise Bagshaw, Helen Fielding and I am well away so I thought it would be a great way to discover a new author.  Since having Little Miss A I have not been reading as much as I would like as I just don’t seem to have the time or energy so it was also a great way to get me back into reading again.

So what is The Mummyfesto about?  It starts with three friends, Sam, Jackie & Anna campaigning to save their local lollipop lady from redundancy with the help of their children.  When a TV reporter asks if they fancy standing in the general election they decide to form the ‘Lollipop Party’ to fight for causes they, and other parents, believe in.  With the help of social media and blogging they put together a ‘Mummyfesto’ to include all those issues that real people would like to see happen.

This book though is not just about politics.  Although politics forms the base for the book, so many more issues are covered.  Sam has a child with an incurable disease and works in a children’s hospice that is struggling for funding; Jackie is struggling to conceive a much wished for second child whilst trying to cope with her Mum’s ever worsening Alzheimer’s; and Anna is dealing with her teenage children’s drinking and bullying problems at the same time as struggling to keep her loveless marriage on track.

I was really impressed with how many issues were tackled in this book and all of them with so much knowledge and compassion.  I have laughed and cried whilst reading it and really became involved with all of the characters’ lives.  I am sure most people will be able to relate with at least one of the issues in this book.

I thought the politics issues were written really well and did not go into so much detail that it was confusing.  At the end of the day they are normal people standing up for issues they believe in, not politicians.  There was one paragraph in the book which I felt summed up the ‘politics’ side of things really well which I would like to share with you…

‘What we were proposing here was to tear up the rule book and not even bother to write a new one.  We were going to work on gut feeling as to whether something was right or wrong.  The same gut feeling that parents the world over relied on when they were trying to decide what was best for their child.  Sure, occasionally they might get it wrong, but as long as they had been motivated by love, by an honest intention to do the best by their child, then nobody could ask for more than that.’

In their Mummyfesto they cover lots of important topics that mean something to them and their families.  Lots of serious and not so serious suggestions were brought up, but my favourite has to be ‘All roads and road signs should be colour-coded…So if you want to go from Leeds to Manchester you just follow the purple line along the road.’  Why no-one has come up with this before I don’t know!  It got me thinking, if I was going to rule the country what would I like to see change…

1.  An issue important to me (as you have probably gathered if you are a regular visitor!) is the fact that bottle feeding Mums are not given the same support as breastfeeders.  I would want that changed.  Obviously there are benefits to breast feeding which need to carry on being provided to mums to be but I think that support should be provided to those who chose not to.  Also, more investigations and reports need to be done into effects of tounge tie on bottle fed babies so that no-one has to be treated the way we were. 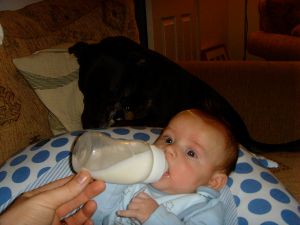 2.  School holidays should be more flexible and the six week holiday should be shortened and spread out.  For working families it is a nightmare trying to find childcare for every school holiday, especially as your children get older and don’t want to be ‘babysat’ anymore.  Most parents will not be able to take all school holidays off.

That’s my serious ones over, the rest are just silly ones that I think would improve every parents life!

3.  A free cleaner for working parents once every 2 weeks mainly to clean bathrooms and change the bedding!

4.  A free babysitter for all parents once every six weeks.

5.  Locals only private roads or times when holidaymakers are banned from the roads, particularly during holiday season.  If you’ve ever lived near a tourist town you will know how frustrating it is to try and get around to do your normal everyday jobs!

If you were in charge of the country, what would you change?

To mark the release of The Mummyfesto a website has been set up to start the debate on what you would change.  Why not visit and let them know your thoughts – you could even win a signed copy of the book!

The Mummyfesto is already available for Kindle and is released in paperback on 14th February.

I will definitely be reading Linda Green’s other novels now!